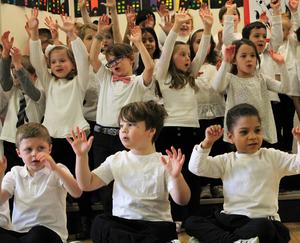 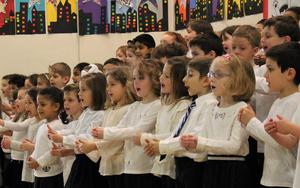 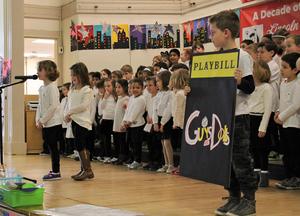 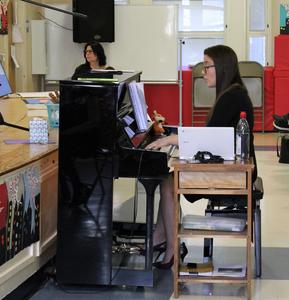 Kindergartners at Lincoln School in Westfield take the stage to perform show tunes from popular Broadway productions including “Annie,” “Guys and Dolls,” “Matilda,” “Seussical” and “The Sound of Music.”

Kindergartners at Lincoln School in Westfield took to the stage on March 23 to perform show tunes from popular Broadway productions including “Annie,” “Guys and Dolls,” “Matilda,” “Seussical” and “The Sound of Music.”

“We are so excited to have you here today to share our Kindergarten Sing-a-Long.  Your children have been practicing and practicing the fun songs you will hear today,” said Lincoln principal Audrey Zavetz as she welcomed parents, grandparents and other family members.  “The Lincoln School Sing-a-Long is truly one of my favorite events.  The musical numbers are catchy, the gym is festively decorated, and our children are showcased at their best.”

This year’s theme was “Broadway Bound” with enthusiastic young performers singing such hits as “Do Re Mi,” “I Love You a Bushel and a Peck,” “Tomorrow,” “When I Grow Up,” and “Give My Regards to Broadway.”

Zavetz thanked music teacher Christina Toulios for her “fabulous efforts” in putting the show together.  The principal also thanked art teacher Amy Hynes for student artwork depicting starry skylines that adorned the gym, the Kindergarten Wrap coordinators and their students for making many of the props, and the school’s hardworking custodians, secretaries, teachers and paraprofessionals.

“I don’t think I’ve seen a better Broadway show,” Zavetz told the kindergartners after the morning performance as the youngsters filed off the stage with Lou Rawls’s “On Broadway” playing over the loudspeaker.  “I think it will have a longer run than Bruce Springsteen.”