Talking to Children about Race 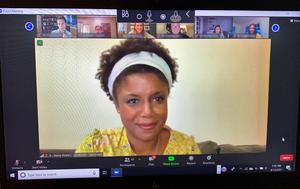 How to talk to children about race was the topic of a special virtual gathering on April 13, with about 50 people in attendance for the session organized by the Westfield Public School District, in partnership with the Westfield Education Fund (WEF).

How to talk to children about race was the topic of a special virtual gathering on April 13, with about 50 people in attendance for the session organized by the Westfield Public School District, in partnership with the Westfield Education Fund (WEF).

After guiding participants through a series of verbal exercises aimed at helping them delve into their own understanding of race and issues surrounding race, co-facilitators Melle Powers and Melissa Shaw advised adults to examine their own comfort level in discussing issues of race as they prepare to talk to children.

“Don’t avoid talking about it,” said Powers who leads training sessions on diversity and inclusion for educators, corporations, and other organizations.  “Be clear, direct, and factual. Encourage questions and don’t worry if you can’t answer them.”

Powers told the group to “model what it is to do research” in helping children to understand and to make sure to tailor the conversation to the child’s age in ways that he or she can comprehend.

“You don’t want to scare your children,” she said.  “What you do want to do is say that something happened and that it is being addressed.”

For middle school students and older, “don’t wait for your child to initiate the conversation about what happened in the news,” said Powers, adding that, in this digital age, older students are quick to hear the news on social media and elsewhere.  “You don’t want them to hear it from their friends.”

Powers also provided guidance on talking to children of color about race and racial violence.  “Ground your children in a worldview that includes their spirituality, family, traditions, heritage, cultural values, and self-respect,” she advised.

Powers and Shaw shared age-appropriate books, movies, and materials to help adults broach the subject with young people. These resources and others are posted on the Westfield Public School District’s “Racial Literacy” page under “Family Resources” at www.westfieldnjk12.org.

The co-facilitators also focused on storytelling, including the stories that exist behind those that are told societally.  Using the example of Rosa Parks and the now famous image of the civil rights activist sitting on a bus, Powers pointed out that there is much more to Parks’ story than just a tired woman following a hard day at work refusing to give up her seat to a white man.

The event was part of the district’s Racial Literacy initiative funded by the Westfield Education Fund which “strives to enhance the quality of education in the Westfield Public Schools by funding high-impact, district-wide initiatives that will promote a culture of innovation and enrich students’ academic and social emotional learning.” More about the WEF can be found at westfieldedfund.org.

“I loved the focus on storytelling and the importance of sharing stories from different perspectives with children,” said WEF president Nicole Breslow.  “The value of having a more diverse set of books in classrooms could not have been clearer.”

Also on hand for the evening were Cheryl Swift of the Westfield Human Resources Advisory Commission, Elizabeth Wolf of the Martin Luther King, Jr. Association of Westfield, and Kimberly Leegan, a social studies teacher at Westfield High School and co-advisor of the WHS No Place for Hate Committee and the Jewish Culture and Development Club.

The three representatives described the ways their organizations are working to address racial and social injustice and invited members of the community to get involved.  Links to their resources also are posted on the “Racial Literacy” page on the school district website.

As organizers of the community learning event, K-12 Supervisor of Social Studies Andrea Brennan and Dr. Tiffany Jacobson, interim principal of the Lincoln Early Childhood Center, thanked Powers, Shaw, and all who attended.

“For as much talking as we are all doing here tonight, it is so, so important to take the time to listen and to take in the messages of the people around us,” said Jacobson.  “That is how we will continue to forge bonds, relationships, and trust.”