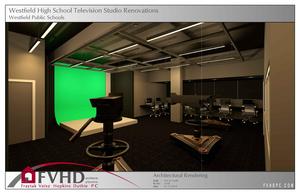 Marvel Studios president Kevin Feige, who graduated from Westfield High School in 1991, has donated $500,000 to be used for audio/video equipment in the new television studio at the high school.

Marvel Studios president Kevin Feige, who graduated from Westfield High School in 1991, has donated $500,000 to be used for audio/video equipment in the new television studio at the high school.

Superintendent Dr. Margaret Dolan made the announcement at the Nov. 12 meeting of the Board of Education.

“Earlier this year, as we finalized plans for a complete overhaul of the TV studio, we reached out to Kevin in March to ask whether he would be willing to contribute to the cost of the studio renovation project,” said Dolan.  “What followed was several telephone conversations with Kevin’s staff and, ultimately, with Kevin himself who took great interest in the plans for the new TV studio.”

Dolan said that Feige delivered the commencement address to the Class of 2013 and, at that time, toured his high school alma mater.  The tour included a visit to the television studio with Feige remarking that the studio, in which he had spent many hours during his high school years, looked essentially the same.

Work began this summer to renovate the aging facility and turn it into a new soundproof production space with studio cameras on pedestals equipped with teleprompters and tally lights, an updated lighting grid, new editing workstations, a professional control room and, because the studio is a teaching space, movable furniture and multiple curtain tracks to create diverse, quick set changes.  The renovation is expected to be completed in the next several months.

“Today, I am proud and grateful to accept a donation of $500,000 from the Feige Family Trust to be used specifically for audio/video equipment in the TV studio,” Dolan said.  “This generous donation will greatly enhance the new studio’s technical and instructional capabilities.  We thank Kevin for his interest and support and we congratulate him on his tremendous success.”